We stayed at the Holiday Inn & Suites in Osoyoos, BC for 5 nights in April of 2017. This was our first trip to Osoyoos as a family and we picked this hotel largely because all of the other hotels I called in Osoyoos were booked solid. They all told me the same thing – Osoyoos gets a number of snowbirds that rent out the hotel rooms on a monthly basis through the winter and they don’t go home until the end of April. Apparently the wheelchair accessible rooms get booked up by people looking to escape the winter weather elsewhere in Canada. This isn’t too surprising given that the daytime average temperatures are higher in Osoyoos than anywhere else in Canada. The winters are shorter and milder and spring arrives earlier than in other parts of the Okanagan. If I could afford it, I would spend my winters in Osoyoos too!

The Holiday Inn & Suites is located in one of the best spots in Osoyoos. It is right on a peninsula in the middle of Osoyoos Lake. There is a small private beach area in the back of the hotel and it is an easy walk to the larger public beach (Gyro Beach) and the downtown area. 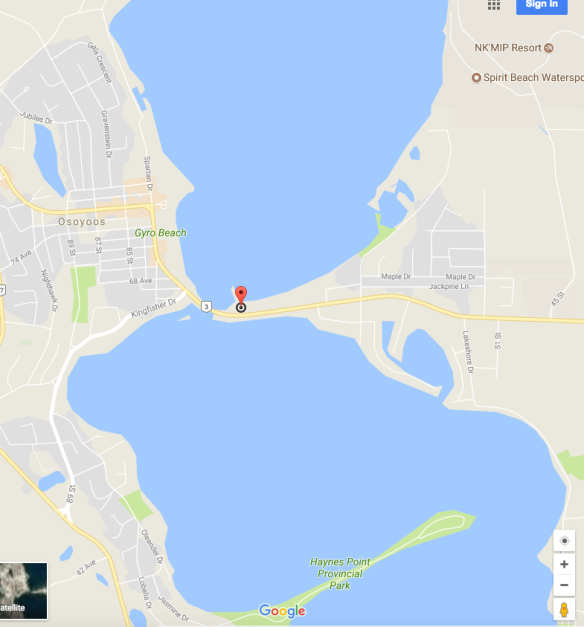 Our room rate for the accessible room with a wheel-in shower was $158.95 per night. The room was really well-appointed for a family. It came with two queen-sized beds in a separate bedroom, a large accessible bathroom with wheel-under sink, wheel-in shower (with built-in bench) and a toilet with grab bars.

The rest of the room had a very large living space with a full-sized kitchen, dining area and living room with couches and a TV.

There was a large balcony off of the living room which made for a nice spot to sit at the end of the day. 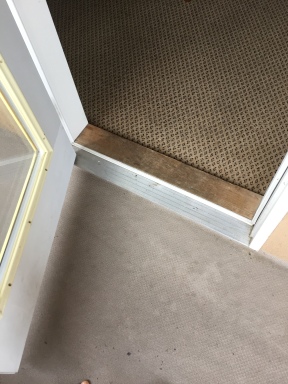 There was free laundry available at the end of one of the hallways. The hotel also had a restaurant with a beautiful view overlooking the water. 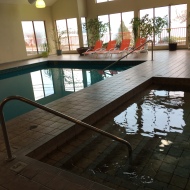 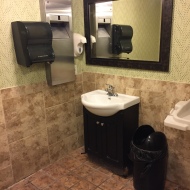 This hotel is clearly not one of the finer properties in Osoyoos. It served its purpose, however, it is outdated, dirty and looks run down. It was probably in its prime 30 years ago.

The wheel-in shower in our room had a built-in plastic shower bench. However, the bench was really far from the taps and it would be a challenge to stay on the slippery bench while trying to reach the taps. If you have mobility challenges, you may require help with this shower.

The hotel had a pool and hot tub, however the pool wasn’t functioning for the first 3 days of our stay due to an issue with the pump. Also, every time I went to the pool area with the kids I had to go to the front desk to ask for towels as they weren’t stocked on the racks near the pool. They would often give me 2 towels for the three of us, which I found strange.

When we checked in, they gave us “kids eat free” coupons for the restaurant. Apparently these coupons can only be used to order food off of the kids’ menu and when we ate at the hotel’s restaurant, we were told that they didn’t have a kids’ menu.

The hallways and common areas in the hotel smelled very strongly of curry and other combinations of food and grease.

Although the hotel itself wasn’t amazing, the location of this hotel was great. The view from the balcony was really beautiful and it was a very short walk to the public beach area and downtown. We were able to walk everywhere once we arrived.

At that time of year, the town felt a bit sleepy, but it was a great place to unwind, relax and enjoy the beautiful Okanagan air.