This hotel is located on 30 Carlton Street, Toronto, Ontario (there are a couple of Holiday Inns downtown). I stayed here for 2 nights on business in 2014 but was able to view the wheelchair accessible room while I was there.

This affordable hotel is just off Yonge Street in downtown Toronto. While it is a bit further towards the north side of downtown, it is only a 10 minute walk to the Eaton’s Centre. It is less than a block away from the entrance to the subway, next door to a Loblaws grocery store and across the street from several small, independent restaurants. There was a restaurant in the lobby of the hotel for those interested in a sit down meal and there was also a Starbucks connected to the front of the hotel.

I particularly appreciated the fact that there was a Subway restaurant across the street from this hotel and there was a big Winners store on the corner of Carleton and Yonge Street.

There was a large ramp at the entrance of the hotel for wheelchair access. The doors into the hotel were automatic, the lobby was accessible and there were elevators for access to each floor. 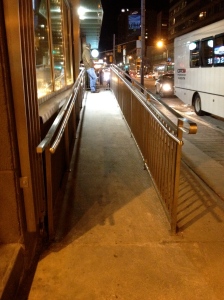 There was a pool at this hotel, but no hot tub. The pool was located on the 6th floor and it was accessible. The bathroom immediately outside of the pool area was also relatively accessible, with large showers, wheel-under sinks and a large changing area. The water in the pool was very warm. 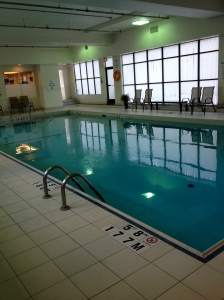 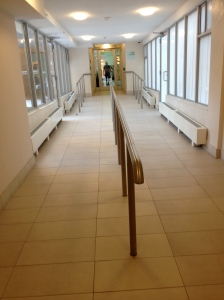 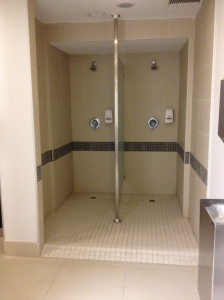 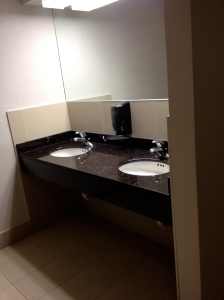 There was a gym at the back of the pool area. The gym was accessed by walking up a few stairs. I did not see any wheelchair access to the gym, although I didn’t use the gym so I may have missed it.

The wheelchair accessible rooms were very small but functional. They had a wheel-in shower, a wheel-under sink and grab bars by the toilet. There was a built-in shower bench in the shower. 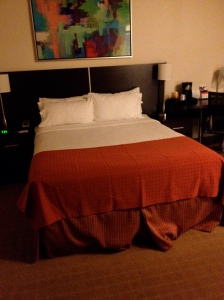 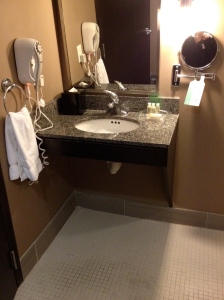 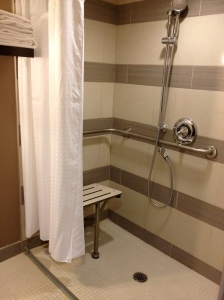 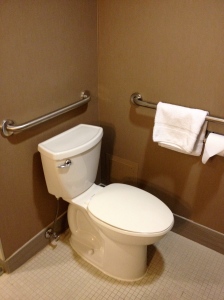 The rooms had a mini-fridge, a TV, a desk, a chair, a safe and an iron and ironing board. 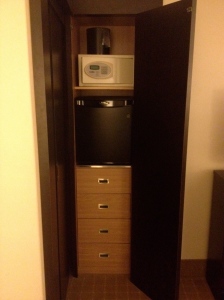 The trip to and from the airport in a taxi cost about $65 each way and it took about 30 minutes.

There was nothing luxurious about this hotel. It was basically a cheap place to sleep. The carpets were dirty and although the bathrooms appeared to be recently renovated, the rooms appeared run down. The decor was a hideous orange colour and could definitely use some major updating. There was no view to speak of. The window overlooked an alleyway. 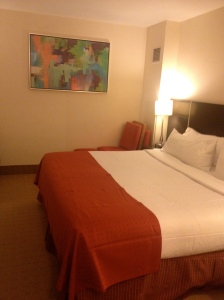 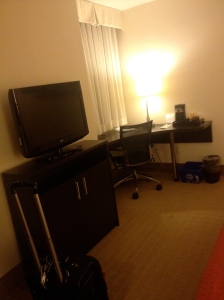 Desk and TV in Regular Room 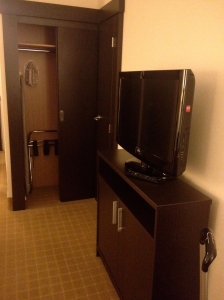 TV and Closet in Regular Room

The bathroom in the regular (non-accessible) room I stayed in was extremely small and had no bathtub (only a shower). 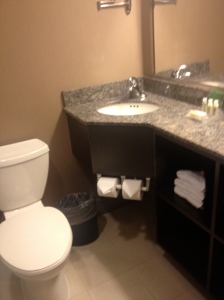 Sink and Toilet in Regular Room 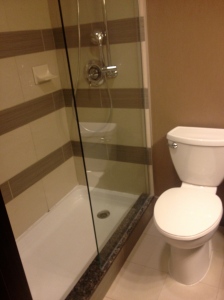 Shower and Toilet in Regular Room

The location of this hotel isn’t great if you want to be in the heart of the action.  Although it is only 10-15 minutes away from the central part of downtown, this may be too far for some people. 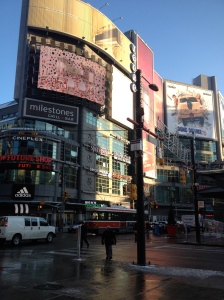 This hotel is also not in a location where you would want to be out walking around by yourself late at night. It is a bit too far from the main action and it is very dark on this street.

The rooms in this hotel are really ugly. I felt like I didn’t want to touch things in the hotel room because everything looked so old and dirty. You typically get what you pay for and this hotel is no exception.

While this isn’t an amazing hotel, I think it is a good alternative if you are looking for a cheap place to sleep in downtown Toronto. A nice hotel in downtown Toronto will cost you over $250 a night. This hotel cost me $150 a night. Considering it had easy access to food, good wheelchair accessibility and was close enough to the heart of downtown to walk/wheel there, I thought it was a decent choice for a short stay.

We stayed at the Hilton Toronto in May of 2012. We booked this hotel based on a phone conversation with the front desk and were pleasantly surprised with what we saw when we arrived. This hotel is right in the heart of the downtown core.

The location of this hotel is really convenient. It is easy to drive to when you come in to downtown from the Gardiner Expressway. There is valet parking at the hotel, which makes it easy to check in and not have to worry about parking. This hotel is within walking distance of the Eaton’s Centre (to the North) and The Beach (to the South). The CN Tower was visible from the window of our hotel room and we could have walked over there if we had wanted to explore it. 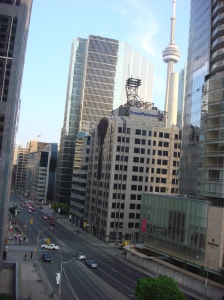 View Out Window in Room 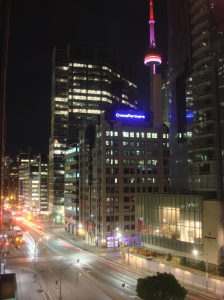 View From Window At Night 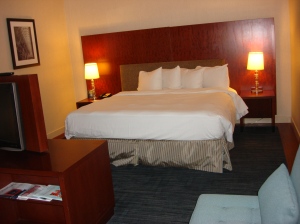 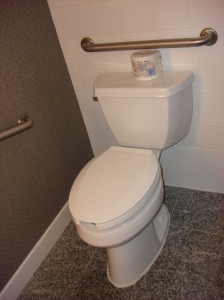 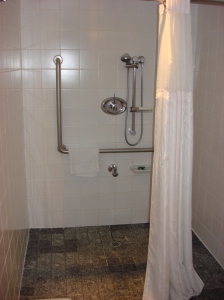 We had no issues with getting in to the hotel or getting around in it. We had a lot of fun exploring downtown Toronto and got to see some pretty cool sights. Before we went there, I didn’t even realize that there was a beach in Toronto but we went there and felt the sand in person! 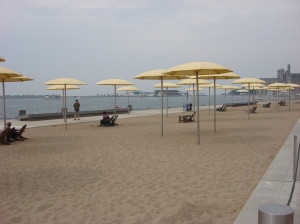 There are some really cool sights along the shoreline in downtown Toronto. This is definitely an area to explore if you have time. 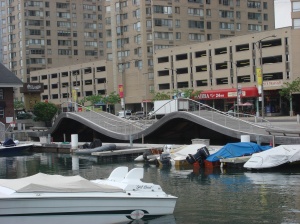 This Was Fun in the Wheelchair!

Unfortunately I didn’t snap a picture of the sink in the bathroom, but in our room it was not wheel under. It is always surprising to me when a hotel puts in the effort to install a wheel-in shower and an accessible toilet and then they neglect the sink, but this is one of those hotels. Hopefully they will be renovating these sinks soon and ensuring that they are adequate for a wheelchair user.

The pool was an indoor-outdoor pool and the area looked very run down. The inside area was dark and dungeon-like and the outside area was cold and uninviting. It was in the process of being renovated when we were there, so hopefully they have since made some significant improvements. 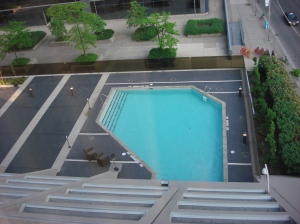 The pool area at this hotel was ugly, I must say. We went down there and, because of the way it looked, my husband refused to go in the pool. I went in but only swam for about 5 minutes. There was no hot tub and the area wasn’t what anyone would consider relaxing.

Overall, this is a convenient, economical option in a great location in the heart of downtown Toronto. The accessible rooms aren’t perfect but they will probably meet your needs for a short stay.